Kevin Hart & Dwayne Johnson: Taking ‘Jumanji’ To ‘The Next Level’ 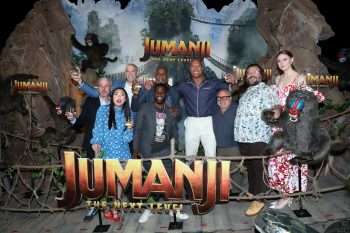 With more than $400 million in domestic revenues and a worldwide box office figure within shouting distance of $1 billion, Jumanji: Welcome to the Jungle surprised a lot of people by becoming such a huge hit. What isn’t surprising, of course, is that there’s a sequel. With Jumanji: The Next Level hitting theaters next month, we spoke with stars Kevin Hart and Dwayne Johnson about what made Welcome to the Jungle so appealing, and why they think The Next Level will offer more of the same. (Click on the media bar below to hear Kevin Hart & Dwayne Johnson)

Jumanji: The Next Level opens in theaters on December 13.