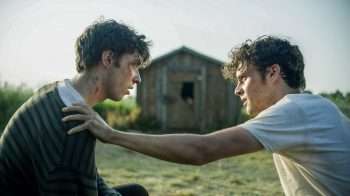 Directed and penned by Frank Sabetella, The Shed centers on Stan (Jay Jay Warren) a teenager who discovers a vampire (Frank Whaley) who’s living in the backyard of his grandfather’s (Timothy Bottoms). Having a creature trapped inside the shed becomes a nightmare experience for Stan, but his bullied best friend Dommer (Cody Kostro) sees the vampire as an opportunity to exact vengeance on his abusive colleagues.

Sabatella could have turned The Shed into a blood fest filled with a soaring body count, but instead The Shed is a refreshingly nuanced tale of revenge and the toxic effects of bullying.

“It actually took quite a while,” said Sabatella on writing the final draft of his script. “The core of the story, the vampire trapped inside the shed, was an idea that my film school friend Jason Rice had come up with in a short story. I took his short concept and I expanded it to this present story that we have about the abuse and neglected teenagers and the revenge aspect and all that . . . tt really took time and rewriting of the elements to really bring all that forward and get those striking story elements out.

Click on the media bar to hear Sabatella talk about the advantages of adding such first rate veteran actors like Bottoms, Whaley, and Siobhan Fallon Hogan (she plays a deputy) in his feature:

The Shed is now playing in theaters and is available on Digital HD and VOD.