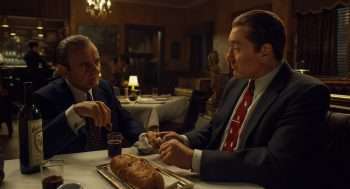 The Irishman centers on the life of hit man Frank Sheeran (Robert De Niro), a member of the Bufalino crime family who also became a close friend of Jimmy Hoffa (Al Pacino). Directed by Martin Scorsese, the feature is a shoo-in for a slew of Oscars this season, and even with his recent comments on comic book movies, this may be Scorsese’s year. Now playing in select theaters, The Irishman is set for a November 27th debut on Netflix.

Another film we highly recommend on is Danger Close, the true story of 108 Australian and New Zealand soldiers who engaged in The Battle of Long Tan. The Vietnam War feature, starring Luke Bracey, Travis Fimmel, and Daniel Webber, is ably directed by filmmaker Kriv Stenders. Danger Close is now playing in theaters and is also available on Digital and On Demand.

Take a listen to the latest episode of CinemAddicts: