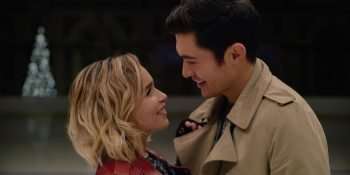 After the success of Crazy Rich Asians, Henry Golding starred in yet another hit with A Simple Favor, a twisty mystery/comedy that co-stars Anna Kendrick and Blake Lively.

Golding reunites with A Simple Favor director Paul Feig with Last Christmas, a comedy about Kate (Emilia Clarke), a woman who is essentially down in the dumps until she meets a stranger named Tom (Golding) who gives her an entirely different outlook on life. Kate doesn’t really think she has much time to smell the roses, but Tom may change things for the better.

Click on the media bar to hear Golding discuss why he loved doing such “heartfelt” and “moving” scenes with Clarke in Last Christmas.