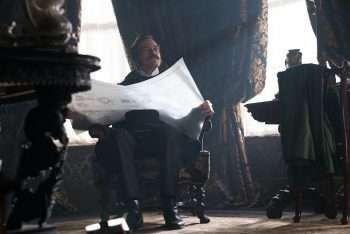 The Current War: Director’s Cut, directed by Alfonso Gomez-Rejon (Me and Earl and the Dying Girl) is now out in theaters after a trying two year journey. With five new scenes and a different score, the picture is closer to Gomez-Rejon’s ultimate vision on the battle for electricity that involved Thomas Edison (Benedict Cumberbatch) and George Westinghouse (Michael Shannon). Nicholas Hoult co-stars in the feature as Nikola Tesla, with Tom Holland playing Samuel Insull.

Gomez-Rejon’s extensive research for the project ultimately led to a deeper admiration for George Westinghouse. Click on the media bar to hear the filmmaker talk about what made Westinghouse a unique individual:

Penned by Michael Mitnick (The Giver), The Current War: Director’s Cut is now playing in theaters.