How ‘The Irishman’ Brought Scorcese & De Niro Back Together Again 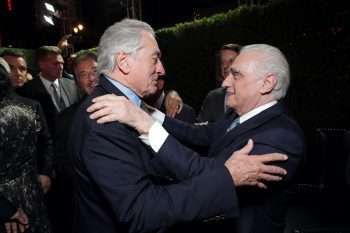 Martin Scorcese is one of the most iconic names in Hollywood. As far as directors go, he’s easily in the top echelon, right up there with guys like Spielberg, Kubrick, and Hitchcock. With the ability to make whatever he wants to make, Scorcese’s latest is a Netflix production, The Irishman, that some critics are already calling his best work. While the film pairs him with Al Pacino for the first time, it reunites him with Heat star Robert De Niro. When we spoke to Scorcese, he told us he’s been wanting to work with De Niro again for a long, long time, and he’s thrilled to be able to do a project that brought all three names together. (Click on the media bar below to hear Martin Scorcese)

The Irishman is streaming on Netflix.