Things Got Real For Darren Criss On The ‘Midway’ Set 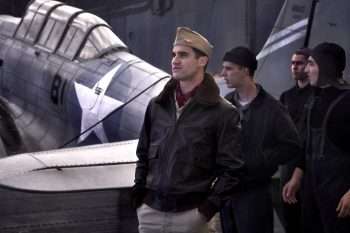 As a rule of thumb, filmmaker Roland Emmerich doesn’t make small movies. No matter what the subject matter is, chances are he’s going to make it into a spectacle. So when the director of Independence Day and The Day After Tomorrow decided to take on World War II’s famous Battle of Midway, it wasn’t exactly going to be an intimate period piece. At least, that’s what Darren Criss was expecting when he signed on to make the film. When he showed up at the set, Criss told us, he wasn’t disappointed at all — he felt like he’d walked onto a real, honest-to-goodness American aircraft carrier. (Click on the media bar below to hear Darren Criss)

Midway opens in theaters on November 8.