Eddie Murphy Gets It Right With ‘Dolemite’ 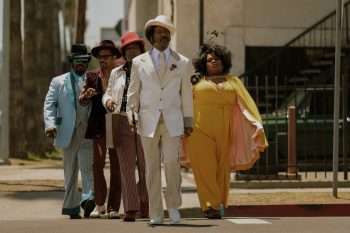 There’s a classic scene in the TV show Taxi in which a young, strait-laced Jim Ignatowski takes his first bite of a marijuana-laced brownie; we immediately see him begin his transformation into the hilariously loopy character he would become. After watching Dolemite Is My Name, I could picture a young Eddie Murphy listening to Rudy Ray Moore’s comedy album for the first time. Within seconds, I saw that toothy Murphy smile appear. Mere moments later, I imagined him unleashing that iconic horse-like laugh we’ve grown to know so well.

It’s easy to draw a line from the bawdy, blue humor of Moore to the raucous, raunchy humor of Raw Murphy, and it’s even easier to view Moore as a hero of young Murphy’s.

It’s no wonder, then, to see Murphy throw himself whole-heartedly into the role of Moore in Dolemite Is My Name. It was clearly a labor of love, exactly what he needed to bring him out of his three-year acting exile. At age 58, Murphy has been rejuvenated by the opportunity to bring Moore’s story to the screen.

Granted, he didn’t have to be rejuvenated too much – Moore is no spring chicken when we first meet him. He’s not exactly a washed-up has-been; he’s more of a world-wearied almost-was. As a singer, he laments how he might have hit the big time, if only his record label hadn’t signed some guy named James Brown. As a comedian, he’s been reduced to getting a few precious seconds each night as an emcee at a local L.A. dive bar.

He spends his days as an assistant manager of a record store, and that’s where his fortunes change. There’s a vagrant (Ron Cephas Jones of This Is Us) who comes into the store, spouting outrageous stories about a dude named Dolemite. Where others see the alcohol-induced ramblings of an old, broken man, Moore sees buried treasure. Armed with a tape recorder and a wad of cash, Moore seeks out the old man and his stories. After polishing them into comedy routines, Moore breaks out his pimpiest-looking suit and creates the Dolemite character.

Before he knows it, Dolemite is a smash hit. After recording his new routine at the club, he sells enough self-produced records to get the attention of a record company, which sends him out on the road and helps make the album a hit.

But Moore wants more. He becomes convinced that Dolemite could be big-screen dynamite. After his Hollywood pitches go nowhere, though, he takes on a Dolemite film as the ultimate DIY project.

Recruiting a local playwright (Keegan-Michael Key) to write it and a minor Hollywood star (Wesley Snipes) to direct, the Dolemite movie starts to come to life in a bumbling, stumbling, “how are they ever going to finish this?” kind of way.

Murphy clearly relished the opportunity to re-create some classic scenes from the real Dolemite film, throwing himself into them with unbridled glee and the requisite reckless abandon. Moore might have been making a train wreck, but he sure wanted to have fun doing it. After all, if he was having fun, wouldn’t a theater audience?

When the movie’s finished, it’s looking like theater audiences might never get that chance. Nobody in Hollywood wants to release the train wreck, and it looks like Moore’s signed away his life’s recording royalties for nothing.

But then, as the request of an Indianapolis DJ (Chris Rock), Moore books the movie into the late-night slot at a local theater, and with the DJ’s support, he fills the theater. Dolemite becomes a local sensation, attracting the eyes of a studio that had already turned the film down once. Moore signs a distribution deal with the studio, and the rest is history.

While the original Dolemite movie’s production might have been bare-bones, the same cannot be said about My Name Is Dolemite, which sits squarely in the “quality biopic” genre. Regard for Moore in the African-American community – especially among its entertainers – has attracted a first-rate cast, including Craig Robinson, Mike Epps, rappers Snoop Dogg and T.I., and Da’Vine Joy Randolph, who overflows with sass as Moore’s comedic discovery, Lady Reed.

The quality of the cast helps make the directing job easy for director Craig Brewer, who manages the ebb and flow of the story nicely. It’s got an “underdog sports story” feel that serves the film better than a “rags to riches” approach would have. The crew re-creates the look of the ‘70s, from its gaudy clothing to its muted Earth-tone cinematography, with loving care.

But it’s Murphy – who is also one of the film’s producers – who provides the highest octane for the movie’s engine. While a younger, brasher Murphy may not have been able to handle the nuances of a character like Moore, the current incarnation – older, wiser, and all too familiar with the perils and pitfalls of stardom – has accumulated enough life experience to do the character justice.

Will Dolemite Is My Name reignite interest in Rudy Ray Moore and his work? It may, although the Dolemite clips that run during the credits do look hopelessly dated. Will it make fans happy that Eddie Murphy is back, with new movies and stand-up specials on the way? Absolutely.

Dolemite Is My Name is now streaming on Netflix.