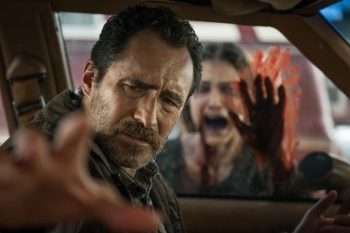 Takashi Shimizu’s Ju-On: The Grudge was later remade stateside with 2004’s The Grudge (which he also directed).

Although Shimizu is not behind the camera for this iteration, The Grudge is helmed by Nicolas Pesce, the visionary filmmaker behind The Eyes of My Mother and Piercing. Pesce has a knack for building immersive and tangible worlds within an indie budget, and will be interesting to see how his cinematic flair is influenced with more cash at his disposal.

Andre Riseborough (Mandy) is the police officer who immediately regrets her latest investigation, and from the trailer we can deduce this spirit haunts everyone (including Demián Bichir and John Cho) who comes its way. The trailer is absolutely chilling to the bone, and I’m betting Pesce’s streak of crafting excellent stories continues. Check out the trailer and tell us what you think!