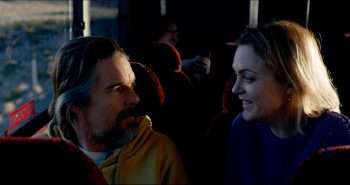 Actor Logan Marshall-Green makes his feature directing debut in Adopt a Highway, the tale of Russell Millings (Ethan Hawke), a dishwasher who is gradually readjusting to civilian life after 21 years in prison.

Hawke delivers another first rate performance in the beautifully rendered story. Along with casting Hawke, Marshall-Green made a great decision at hiring Grammy winning artist Jason Isbell as the film’s composer.

“It was only through Ethan’s suggestion that I throw just a solo guitar at the character and see what happens,” said Marshall-Green, whose acting credits include Upgrade and The Invitation. “In seconds, boom – it came to life. We’re finding now who was going to be that storyteller sonically and once Jason Isbell showed an interest, it was a no brainer. And then, the greatest thing, happened. Jason Isbell introduced the film to me and the rest was history to me in many ways. A lot of that is because of Ethan as a leader and Ethan’s understanding of music which is far beyond mine. Sure enough here we are with Jason Isbell, whether he knows it or not, being a character in this (film).”

Click on the media bar to hear Marshall-Green talk about why casting Hawke as the lead was “essential.”

Adopt a Highway, co-starring Elaine Hendrix, opens in theaters, On Demand and Digital on November 1.