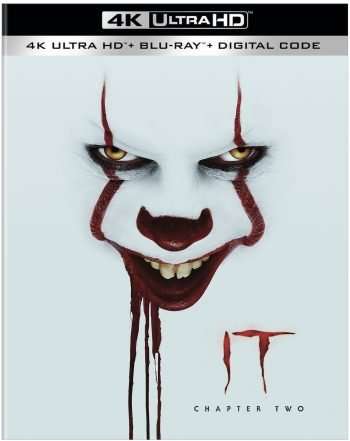 It Chapter Two, the hit sequel which grossed over $700 million worldwide, hits Blu-ray, DVD, and Digital on December 10 via Warner Bros. Home Entertainment. The feature comes out on Digital on November 19.

James McAvoy, Jessica Chastain, and Bill Hader are among the actors who star in the feature, with Finn Wolfhard, Jaeden Martell, and Wyatt Oleff reprising their roles from the original film. Bill Skarsgard returns as Pennywise. Special features on the Blu-ray Combo Pack include commentary with director Andy Muschietti and several featurettes (“Pennywise Lives Again!,” “This Meeting of the Losers Club Has Officially Begun,” “Finding the Deadlights,” “The Summers of It Chapter One, You’ll Float Too,” and {“The Summers of It Chapter Two, It Ends). The DVD version does not come with Muschietti’s commentary.

Were you a fan of both It films and are you excited for the Blu-ray release? Feel free to comment below!

Kate Nash: Underestimate The Girl is a clear eyed and ultimately inspiring documentary on how pop star Kate Nash persevered through her share of...
Read more

A Christopher Nolan (Inception, Dunkirk) movie is always eagerly anticipated, as he's one of the rare filmmakers whose movies reach a wide audience and...
Read more

Directed by Andrew Patterson, The Vast of Night centers on a radio DJ named Everett (Jake Horowitz), who investigates the origin of a strange...
Read more

When Gina Rodriguez was born, Scooby-Doo was already a cultural icon. Starting with the 1969 animated series and continuing through several movies, the scruffy...
Read more

I Still Believe, the biopic about Contemporary Christian artist Jeremy Camp, was a surprise hit earlier this year -- first in theaters, and then...
Read more

Lucifer fans are happy as hell these days. Not only will they soon be getting a fifth season of the show on Netflix, but...
Read more

Like so many other television shows, America's Got Talent has been affected by the COVID-19 pandemic. But while many shows have gone into an...
Read more

When a TV show gets rebooted with some of the old roles now being played by new actors, it can be frustrating and intimidating...
Read more

Michael Pitt (Boardwalk Empire) and Ron Perlman (Sons of Anarchy) star in Run With The Hunted, a thriller that centers on Oscar (Pitt), a...
Read more

Directed by Jonathan Milott and Cary Murnion, Becky features Lulu Wilson, a youth who spends the weekend with her father Jeff (Joel McHale), his...
Read more

Directed by Benjamin Ree, The Painter and The Thief centers on Barbora Kysilkova, a Czech artist who Karl-Bertil Nordland one of the people who...
Read more