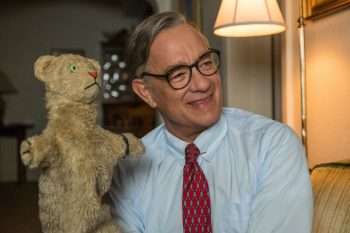 There’s no denying that Fred Rogers was an incredible man who left an incredible legacy. Millions of Americans grew up learning how to deal with their emotions by watching Rogers and his friends on Mr. Rogers’ Neighborhood, which ran for more than three decades on PBS. As he was preparing to star in A Beautiful Day in the Neighborhood, Tom Hanks spent a lot of time studying and trying to understand Rogers better, and he told us that he learned a lot about both Rogers and himself. (Click on the media bar below to hear Tom Hanks)

A Beautiful Day in the Neighborhood opens in theaters on November 22.