‘The Laundromat’ Plays One Shell Of A Game 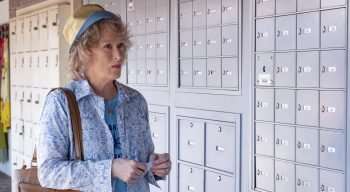 Actually, it’s all that, and then some. And if that sounds like a little too much for one movie to handle, well, perhaps it is. The Laundromat clocks in at 96 minutes but manages to feel like it’s closer to 150, even though director Steven Soderbergh uses every trick in the book to hasten and tidy up the affair. There’s narration, animation, summation, and fourth-wall breaks galore as Soderburgh tries to somehow simplify the tricky trickling of money through the complex world of offshore financial services.

So why does it feel so long? It’s a big story. It’s a complicated story. It’s a story that jumps from continent to continent, told in a series of vignettes about people — some real, some fictitious — whose lives were ensnared in a real-life scandal that has come to be known as the Panama Papers.

After an amusing prologue that explains the history of money through the eyes of the film’s on-screen narrators and real-life Panama Papers perpetrators Mossack and Fonseca (played in opulently over-the-top fashion by Gary Oldman and Antonio Banderas), we meet Ellen Martin (Meryl Streep) on what will become the first of a series of worst days of her life. A tourist outing turns tragic when the boat capsizes, and her husband is among the 21 people killed. Then, after she’s led to believe she’ll be compensated with a sizeable insurance settlement, she discovers that — thanks to a little bit of cost-cutting by the boat operators (David Schwimmer and Robert Patrick) — the “insurance company” is nothing more than a shell game being played in foreign countries and tiny Caribbean islands.

While Martin’s story serves as the through line for the plot — after all, why would you waste an asset like Meryl Streep, who’s brilliant as usual — it’s at this point where the film starts to take several detours.

Each of these detours tries to explain another rule or two of how the shell game is played. Some are cruel, like the one in which a philandering California father tries to buy his daughter’s silence with bearer bonds that are supposedly worth $20 million. (Of course, before she can cash in, dear old Daddy moves all the money around, leaving her with $37.) Some are criminal, like the dramatization of British businessman Neil Heywood’s real-life poisoning in China.

In the end — as it did in real life — the film winds up in Panama, where the mighty financial firm of Mossack Fonseca is taken down by an anonymous leak of several million documents.

Well, until the film winds up on a soundstage, where Streep literally strips herself out of character and breaks the fourth wall to deliver a scathing indictment on the political system that has allowed these financial cons to flourish. It’s the kind of rant that won’t win the film any fans with the MAGA crowd, but is stunningly on point.

Then why do I sit here, writing this review, still feeling unsure whether I actually liked the movie?

I didn’t dislike The Laundromat, but it somehow doesn’t quite equal the sum of its parts, and it’s hard to put a finger on why that is. Maybe it’s because so many of the story’s characters are pretty despicable humans. Maybe it’s because even when the bad guys lost, the good guys didn’t actually win. Maybe it’s because you’re left with the feeling that the outlook is still grim for the 99%. Or maybe all of the above is just a bit overwhelming.

So we’re left with a film that’s hard to dislike, yet hard to like. Just like the reality it portrays, it lives somewhere in a grey area.

The Laundromat is now streaming on Netflix.