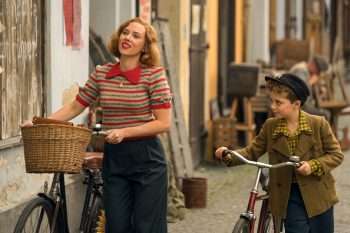 Yes, Jojo Rabbit may be a bit of an odd movie — after all, there aren’t too many comedies that feature Adolf Hitler in a prominent role. But it’s also a very poignant, touching movie. That helped sell Scarlett Johansson on the role of Jojo’s mother, and she told us she thinks the messages in the movie operate on several different levels. (Click on the media bar below to hear Scarlett Johansson)