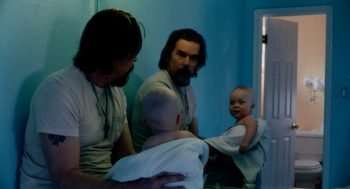 Ethan Hawke, seen earlier this year playing Pat Garrett in The Kid, stars as an ex-convict in the upcoming feature Adopt A Highway.

Russ Millings (Hawke) has just been released from prison after serving 21 years for a third strike conviction. Now a free man, Russ is trying to adapt to a world that he feels may have passed him buy, and his first step at civilian life is working as a dishwasher at a fast food restaurant. After discovering an abandoned baby in a dumpster, Russ’ life obvious takes an a drastic turn (hopefully for the better).

The picture marks the feature directing debut of Logan Marshall-Green, the lead actor of last year’s well received thriller Upgrade. Check out the trailer and tell us what you think!

Adopt A Highway opens in theaters, On Demand, and Digital on November.