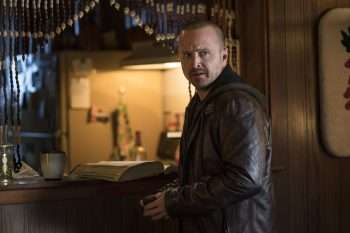 In the literal sense, it’s because – although six years have passed since the Breaking Bad finale – the action in El Camino picks up mere minutes after the climactic battle that left White among the ranks of the recently departed.

But White’s death also leaves the movie (for the most part) without Bryan Cranston, the force of nature whose award-winning performance escalated the show from a storm into a full-blown hurricane.

And though it’s Walter White who’s now a ghost, it’s Jesse Pinkman who wants to disappear. The film’s prologue is a newly shot flashback to better times, when Jesse and his old colleague Mike (White’s fixer) talk about what life will be like after White’s gone. When Mike warns Jesse that the one thing he can never do is “make things right,” we jump violently to the present, with Jesse desperately fleeing the scene of the finale’s carnage in a stolen El Camino.

The present-day Jesse is a badly broken man. Unkempt, unshaven, and seriously disheveled from his time spent captive in his tormentors’ cage, it’s tempting to say that he’s suffering a severe case of Post-Traumatic Stress Disorder. But it can’t be PTSD, because his trauma hasn’t ended yet. He may have been freed from his cage, but all of his inner demons left with him in that El Camino.

The film relies on Aaron Paul’s ability to carry the story almost completely on his own as Jesse, and he does an admirable job. Between the flashbacks to more prosperous times and the manic intensity driving him to find his freedom, Paul does great work in presenting several different shades of the heroic anti-hero.

But again, the elephant in the room is Walter’s ghost. On Breaking Bad, the acting partnership of Cranston and Paul created amazing chemistry (literally and figuratively). And while there’s nothing wrong with the performance Paul gives in El Camino, you can’t help but feel something’s missing without Cranston there.

Ultimately, El Camino is a caper movie, with Jesse trying to find the funds that will finance his disappearance. As in the prologue, the movie flits between past and present to expose Jesse’s motivations and mindset, revealing little glimpses of his Breaking Bad life unseen on the series. It’s not just a dramatic device – it also gives the film a chance to bring back some characters whose lack of a pulse would otherwise keep them out of a movie shot wholly in the present. (That’s how we get a poignant, but too brief, cameo from Cranston.)

Written and directed by series creator Vince Gilligan, the film stays true to the show’s modus operandi of long, dramatic stretches of character introspection interspersed with heightened moments of tension, conflict and, of course, violence.

As a self-contained story, El Camino is a solid film worthy of the Breaking Bad connection it carries in its title, with excellent work on both sides of the camera. But just as Jesse finds it impossible to outrun his past, “El Camino” cannot ditch the ghost of Walter White. Perhaps that’s the way it should be – after all, Jesse is Walter’s Frankenstein, a creature molded and shaped by its creator, imbued with some of his best and worst qualities. Still, the movie misses the synergistic chemistry between Paul and Cranston that made the series sizzle, and though we’re given a good story and a satisfying sense of closure, we’re left with a feeling of wanting something more.