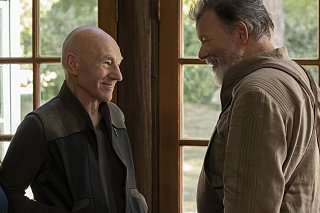 When Sir Patrick Stewart won the role of Captain Jean-Luc Picard on Star Trek: The Next Generation back in the 1980s, he was virtually unknown in the United States, but very well known in his homeland of Britain. Since the British acting community tends to be rather tight-knit, we asked Stewart if he got a lot of support from his fellow UK thespians when he decided to try out for the part. (Click on the media bar below to hear Sir Patrick Stewart)