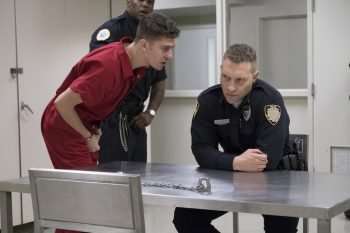 Directed by Henry-Alex Rubin (Disconnect, Murderball), Semper Fi centers on Cal (Jai Courtney), a police officer and Marine Corps reservist who is the de facto leader of his group of friends (Beau Knapp, Finn Wittrock, Arturo Castro). When Cal’s younger brother Oyster (Nat Wolff) is sent to jail after a tragic bar fight, Cal hatches a plan to break his sibling out of prison.

Semper Fi’s strength lies in the palpable chemistry among the men, as brotherhood and sacrifice are the concepts explored in the feature by Rubin and co-writer Sean Mullin. Courtney delivers one of his strongest performances to date (he also starred as a soldier in 2015’s Man Down), and it’s a drama that, in my opinion, is worth a look.

Also covered on our latest CinemAddicts podcast is The Dead Center, a horror thriller starring Shane Carruth that comes out October 11 and Joker.