How ‘The Irishman’ Brought Scorcese & De Niro Back Together 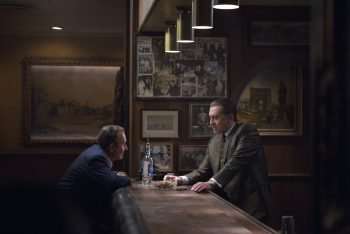 If you’re looking for proof that the Hollywood paradigm is shifting, consider The Irishman. Some are saying it’s director Martin Scorcese’s best movie ever. It’s already generating a ton of Oscar buzz. It’s got a first-rate cast, toplined by Robert De Niro, Al Pacino, Anna Paquin, and Joe Pesci. And it’s a Netflix movie. It took The Irishman to reunite Scorcese and De Niro after nearly 25 years; at a press event, the two legends talked about how the collaboration came together. (Click on the media bar below to hear Martin Scorcese & Robert De Niro)

The Irishmen will get a limited theatrical release on November 1, then will make its streaming debut November 27 on Netflix.