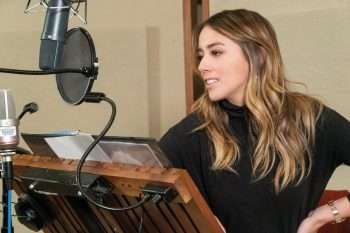 The animated feature Abominable centers on Yi (Chloe Bennet), a teenager who discovers a young Yeti living on the roof of her apartment complex in Shanghai. Yi and her friends are determined to bring this creature, whom they have affectionately named Everest, back to his family in the Himalayas.

“I never connected with princesses, said Bennet who’s best known for her work on ABC’s Agents of S.H.I.E.L.D. “I never felt that was something I saw in myself so the idea (behind) Abominable and that Yi as a character will inspire young girls to feel okay with themselves is really exciting.”

Click on the media bar to hear Bennet talk about she shares similar character traits with Yi:

Abominable was the #1 last weekend, taking in 20.8 million.