‘South Park’ Would Be An Easier Sell Today, Creators Say 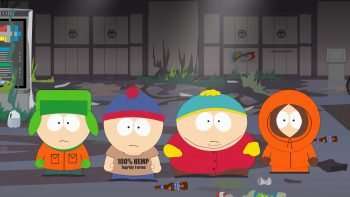 This month, millions of students entered their senior year at universities all throughout America. And nearly all of those students have never known a world without South Park. Comedy Central’s satirical stalwart is just about to enter its 23rd season — and there’s more on the way. Creators Trey Parker and Matt Stone have inked a new deal with the network, taking the show through its 24th, 25th, and 26th seasons. When the show launched in 1997, the world of television and media was a lot different than it is today (it was impossible to stream, after all, on a dial-up Internet connection). When we spoke to Parker and Stone, they told us they had a rough time getting the show on the air back then, and it would probably be much easier in today’s media landscape. (Click on the media bar below to hear Trey Parker &  Matt Stone)