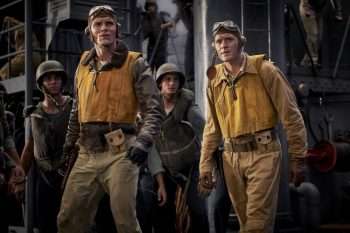 Director Roland Emmerich knows a thing or two about directing blockbusters (Independence Day, Stargate), and in Midway he tackles World War Two with an A-list cast.

War films with a laundry list of movie stars were commonplace in Hollywood for decades, and the 1976 feature Midway starred Charlton Heston, Robert Mitchum, Henry Fonda and Toshiro Mifune.

This time out, it’s Ed Skrein, Patrick Wilson, Luke Evans, Mandy Moore, Nick Jonas, Woody Harrelson and Dennis Quaid who are front and center with this version of the Battle of Midway. The trailer looks absolutely eye catching, and hopefully this feature will be another excellent entry in Emmerich’s body of work. His last feature Independence Day: Resurgence made $389 million worldwide,.