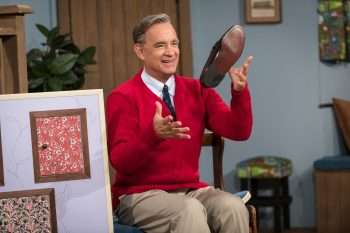 Is there a single living soul in this world who doesn’t love Mr. Rogers? Apparently not. Tom Hanks is getting amazing reviews for his portrayal of the children’s TV star in A Beautiful Day in the Neighborhood, and there’s a lot of buzz around Hollywood about Oscar wanting to be his neighbor (and no, we’re not talking about fellow PBS personality Oscar the Grouch). When Hanks was looking for his inspiration in playing Mr. Rogers, he says a single word came to mind: honesty. (Click on the media bar below to hear Tom Hanks)

A Beautiful Day in the Neighborhood opens in theaters on November 22.