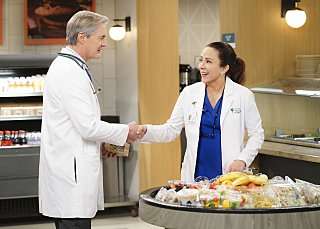 If you only knew Kyle MacLachlan from his work with David Lynch — Twin Peaks and Blue Velvet — you might make, well, certain assumptions about the man. After all, he’s very good at playing characters who are very much out there. When he was being cast for a role on Patricia Heaton’s new comedy series, Carol’s Second Act, Heaton had never met the man, and she admitted she didn’t know much of his work. What she discovered about him, however, was something she hadn’t expected. (Click on the media bar below to hear Patricia Heaton)