Zombie Apocalypse ‘Into The Dead 2’ Hits Nintendo Switch In October 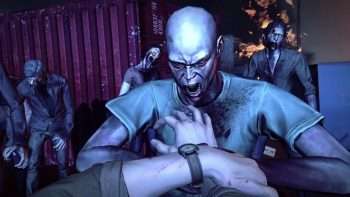 Into The Dead 2 is coming to Nintendo Switch on October 25th via games publisher Versus Evil just in time for trick or treat season. The Into the Dead franchise has amassed over 100 million downloads via mobile, and one would expect that success will reach the Nintendo Switch universe as well.

Licensed Ghostbusters and Night of the Living Dead content will also be sold separate on the eShop and both are featured in the physical edition of the game.

The adventure has gamers facing off against a horde of undead over 60 levels and 36 side story missions. Twenty five unique weapons across 8 different classes are featured in the action packed experience.

“Into the Dead 2 on Nintendo Switch will give players plenty to sink their teeth into with its heart-pounding, arcade-style gameplay. We’re thrilled to include the licensed Ghostbusters and Night of The Living Dead content, which make Into the Dead 2 an essential addition to any Halloween gaming sessions.” Said Steve Escalante, General Manager of Versus Evil.