‘Ode To Joy’: What Doesn’t Kill You Makes You Happy? 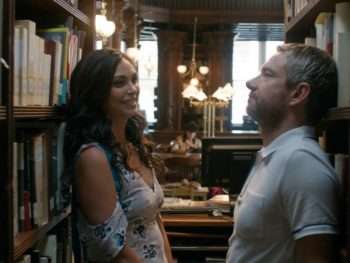 We all know somebody who’s happiest when they’re unhappy, and most of us wonder what makes them tick. Ode to Joy is about such a man, but his misery is literally written into his genetic code.

Charlie (Martin Freeman) suffers from a rare neurological disorder called cataplexy, a condition that causes his muscles to give out when he’s confronted with strong emotions. In his case, it manifests most often when he experiences joy, so he systematically tries to remove it from his life. He has an unchallenging, unsatisfying job at a New York library; he walks around town listening to funeral dirges on his iPod; he tries to calm himself with humorously depressing thoughts (“white guy in dreadlocks”) when he sees puppies, babies, or acts of kindness; and, most significantly, he has no love in his life. “I’ve mostly steered clear of girlfriends,” he explains at one point. “I can’t afford the insurance.”

Then he meets Francesca (Morena Baccarin). She’s gorgeous, newly single, and attracted to Charlie’s dry wit. Although he’s (almost literally) scared to death by the idea of falling for her, his co-workers convince him to take a chance on love.

Then, their first date ends in the emergency room.

Charlie’s faced with a dilemma: He’s attracted to Francesca and wants her in his life, but knows he can’t be happy around her unless he’s unhappy. His novel solution? He sets Francesca up with his shallow younger brother, Cooper (Jake Lacy). That way, he gets to see her on a regular basis, but is miserable because she’s unavailable.

Cooper returns the favor by fixing Charlie up with Francesca’s “boring” co-worker, Bethany (Melissa Rauch). Bethany would actually be perfect for Charlie … but his chemistry with Francesca — even as a friend — is undeniable.

This curious love parallelogram leads to all kinds of complications as the two couples spend a weekend together at a B&B out in the country. Will Charlie get his “happily ever after”? Or will his condition dictate that he needs an “unhappily ever after” instead?

The movie, based on a true story originally told on NPR’s This American Life, resolves things in somewhat predictable Hollywood fashion, but it’s still fun to watch.

As we’ve seen on Sherlock, Freeman excels at playing the dour, put-upon man who’s seemingly doomed to never get what he wants. Baccarin is effortlessly flirtatious as a woman with a history of bad boyfriend choices and a terminally ill aunt. And Rauch will be virtually unrecognizable to her Big Bang Theory fans (aside, possibly, from an amusing aside about how her character is sexually attracted to recurring BBT guest star Bob Newhart).

The movie’s conceit, of course, gives ample opportunity to ruminate on the fine balance between happiness and misery in all of our lives. Can we truly appreciate happiness without moments of despair in our lives? Is happiness simply a construct we create to brighten up our otherwise humdrum existences? Can we allow ourselves moments of happiness when we’re faced with sadness and loss?

As such, the film oscillates between light comedy and pathos, checking most of the standard romantic comedy boxes along the way. As the genre goes, it’s more of a light snack than a hearty meal, but it’s tasty and enjoyable nonetheless.

Ode to Joy is now available on VOD.

For The ‘Other Stallone,’ Life Was Still...

In Hollywood parlance, Stallone is one of those names that stands alone: Hear it, and you instantly conjure up images of Rocky or Rambo,...
Read more

Now that Kyra Sedgwick's career has been going for more than 35 years, it was bound to happen -- she'd start to get some...
Read more

In between the bubblegum pop that ruled the early 1970s and the corporate rock that dominated the second half of the decade came Cat’s...
Read more