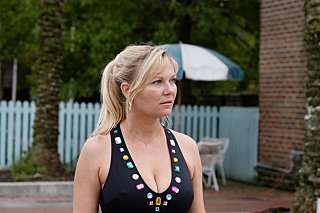 On Becoming a God in Central Florida stars Kirsten Dunst as a women who seeks revenge on the pyramid scheme that left her family penniless. In doing so, she cons her way up the pyramid, playing along with the scheme to get closer to those at the top. The organization resembles a number of the multi-level marketing schemes that were so popular in the ’80s and ’90s, many of which crashed and burned under legal scrutiny. When she took the role, how much did Dunst know about the real-life companies that inspired the show?  (Click on the on the media bar below to hear Kirsten Dunst)

On Becoming a God in Central Florida airs Sunday nights on Showtime.