‘Titans’ Shows Us Dick Grayson Beyond The Boy Wonder 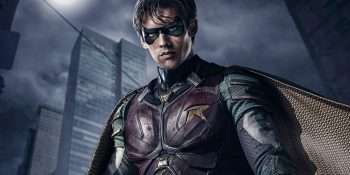 The world is used to seeing the character of Dick Grayson as Robin, the Boy Wonder in the various Batman stories, on the small screen, on the big screen, and in comic books. But the series Titans shows us a grown-up Grayson, one who’s taken flight from beneath the Bat’s wings and started a crime-fighting team of his own. Brenton Thwaites, who plays the adult version of Grayson, told us he’s been enjoying the chance to play such a well-known character in a brand new way. (Click on the media bar below to hear Brenton Thwaites)