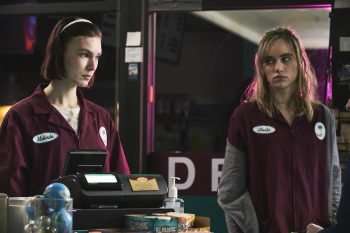 Director/writer Mike Gan’s debut feature Burn centers on Melinda (Tilda Cobham-Hervey) a gas station attendant who, along with her bullying co-worker Sheila (Suki Waterhouse) is held up at gunpoint by a dude (Josh Hutcherson) in need of cash. Harry Shum Jr. (Glee) Officer Liu, a cop who might be Melinda’s only friend.

One of the film’s strongest assets is the knockout performance from Cobham-Hervey, as she infuses Melinda with a level of unpredictability and pathos that kept me invested in the feature. Melinda is actually one of the more interesting film characters I’ve seen in years, and I asked Gan about creating the role.

“I was trying to figure out a character that was the most interesting person to embody that arc,” said Gan, who also directed an episode of the Hulu series Into The Dark.  I thought about a lot of different things that a person would have to carry that out. Melinda spawned from that. It was a complex character. I sometimes hated her. Sometimes I loved her. Tilda Cobham-Hervey read the script and really embraced the character. She did such an amazing job and she understood the balance. It is a hard balance when you make these kind of anti-heroes – these kind of messy characters.”

Click on the media bar to hear Gan talk about why Cobham-Hervey was perfect for the role of Melinda:

Burn, co-starring Shiloh Fernandez, is now playing in theaters and is available on VOD and Digital.