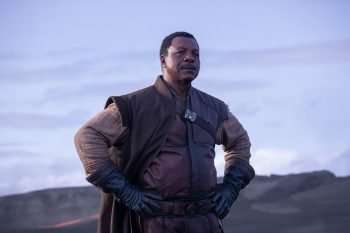 Although we’ve seen some animated small-screen spinoffs of Star Wars, there’s never been a live-action TV series based on the franchise … until now. We’re less than three months away from the premiere of The Mandalorian, which is set in the Star Wars universe, following Return of the Jedi in the story’s timeline. Of course, given that it carries the Star Wars name and brand, Disney knows fans won’t accept a low-quality knock-off, so they’ve stocked the show with plenty of high-profile names, from showrunner Jon Favreau to a cast that includes movie veterans like Nick Nolte, Giancarlo Esposito, Werner Herzog, and Carl Weathers. When Weathers signed on to do the show, he was actually amazed that the project was being made for Disney’s streaming service instead of theatrical release. (Click on the media bar below to hear Carl Weathers)

The Mandalorian will premiere November 12 on the new Disney+ streaming service, and you can watch the new trailer right here.