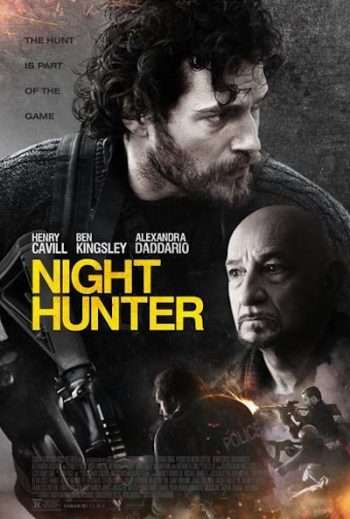 Henry Cavill’s (Man of Steel, Mission: Impossible – Fallout) next anticipated role, especially if you’re a gamer, is the TV series The Witcher. With that said, he also is front and center in Night Hunter, a thriller about a cop named Marshall who has arrested Simon (Brendan Fletcher), a serial killer who seems to be two steps ahead of the game.

Catching the killer doesn’t end his overall game plan, as more deaths occur while he’s behind bars. Is there an accomplice who is helping Simon on his murderous quest?

Marshall and his colleagues (which includes Alexandra Daddario as a fellow cop and Ben Kingsley as a former judge out for justice) seem to be way in over their heads, and the trailer shows this thriller definitely has promise. Stanley Tucci (Beauty and the Beast), Nathan Fillion (The Rookie) and Minka Kelly (Friday Night Lights) round out the ensemble.

Writer/director David Raymond makes his feature writing and directing debut with Night Hunter.  Check out the trailer below and tell us what you think!

Night Hunter, which is available now exclusively on DirecTV, hits On Demand and theaters on September 6.