Richard Dreyfuss Reaches For The Stars, But ‘Astronaut’ Doesn’t Quite Get Off The Ground 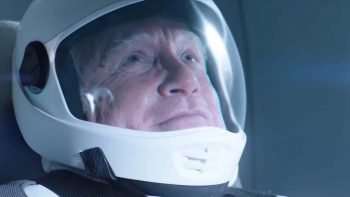 There’s no denying that Richard Dreyfuss is a talented actor, and he’s got the Oscar to prove it. Lately, though, it seems those talents have been squandered in a series of nondescript films with little box office potential. Maybe it’s just his age — at 71, there probably aren’t a lot of plum roles available for him anymore, but he clearly loves his work. And while his passion for acting often elevates his performances above the material he’s given, that won’t be enough to lift Astronaut out of a low orbit.

The film starts out feeling awfully reminiscent of Willy Wonka and the Chocolate Factory, except this movie’s golden ticket is a seat aboard the first commercial space flight and it’s the young boy pushing his old, ailing grandfather to enter, instead of the other way around. Along the way, though, the film pivots into something resembling Rain Man, as Dreyfuss’s character, Angus, becomes overly fixated on a geological anomaly that could doom the mission. Ultimately, it feels like a bait-and-switch move: The movie we wind up with is not the one we think we’re getting during the first reel.

Not helping matters is the script from Shelagh McLeod, a veteran actress making her feature film debut as a writer and director. Angus is the only character in the film who’s fully fleshed out; the others feel like one-dimensional stereotypes in service of Angus’s story. You’ve got the unconditionally supportive grandson, the overly worried daughter, the sternly disapproving son-in-law, and the rich entrepreneur who will stop at nothing in the race to become the first commercial player in space.

It’s a shame, really, because Angus is a compelling character. He’s a 75-year-old widower, and one of his greatest disappointments in life came when NASA denied his bid to become a mission specialist in the Space Shuttle program. So when Marcus (Colm Feore), the rich entrepreneur, sponsors an online contest for the last seat aboard his first space flight, Angus defies the rules and lies about his age to enter the contest. He’s a character defined by his obsessions — getting into space, holding on to the last vestiges of his wife’s life, and his life’s work, geology.

That final obsession propels the last half of the movie, as Angus becomes more and more focused on convincing Marcus and his associates that his maiden space voyage is a disaster waiting to happen. But the constant rock talk gets a little tiresome and tends to drag the film down. Angus’s journey ends in a way that is predictably telegraphed by the film, but still carries some emotional resonance. Not enough, though, to overcome the script’s deficiencies.

Ultimately, while this Astronaut wants to soar skyward, it doesn’t quite have the right equipment to get it into the stratosphere.

Astronaut is currently playing on VOD.