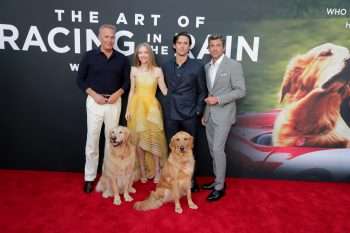 Since leaving Grey’s Anatomy in the show’s 11th season, Patrick Dempsey has had time to pursue a lot of different projects — some in front of the camera, like his Italian-produced TV series Devils, and some behind the camera, like the new movie The Art of Racing in the Rain. though he doesn’t appear in the movie (which stars Milo Ventimiglia of This Is Us), he produced it, and he told us it’s exciting to see the movie hit the big screen, because he’s been working on it for a long, long time. (Click on the media bar below to hear Patrick Dempsey)

The Art of Racing in the Rain opens in theaters on August 9.