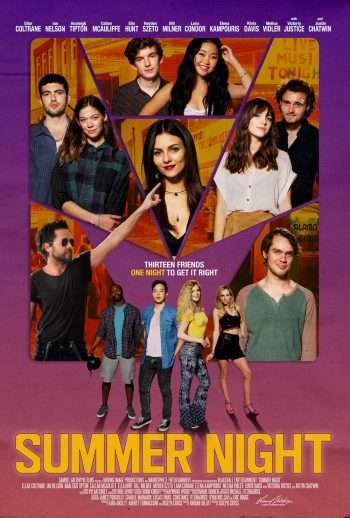 Summer Night centers on a group of twentysomethings over a 24 hour period in a small Northern California town as they deal with their respective relationships and their growing steps towards adulthood. The film marks the feature directing debut of actor Joseph Cross (Running with Scissors, Big Little Lies).

With a talented cast that includes Victoria Justice, Analeigh Tipton, and Justin Chatwin, it’s Ellar Coltrane (Boyhood) who serves as the narrative’s central figure. Jameson (Coltrane) is a teacher who, while juggling feelings for his ex-girlfriend (Elena Kampouris) and a new love interest (Justice), feels a bit stagnant in his own life.

“Ellar just has this intrinsic thing where you want to watch him and spend time with him,” said Cross. “He’s got a meditative spirit and I thought that was the right person, he’s obviously not our narrator but he’s a little bit of our de facto eyes into the world in this storyline. We had a really good time.”

Click on the media bar to hear Joseph Cross talk about how Summer Night is not your average coming of age tale:

Summer Night is now playing in theaters and VOD.

Hulu announced today that the streaming platform has acquired the U.S. rights to Lee Daniels’ The United States vs. Billie Holiday, which will debut...
Read more

From HBO Sports and Jigsaw Productions in association with Our Time Projects comes TIGER, a two-part documentary illuminating in sweeping scope and vast detail...
Read more

Tina Fey and Robert Carlock first worked together in 1997, when Fey joined Carlock on the writing staff of Saturday Night Live. They reunited...
Read more

Based on the Dark Horse comic, SYFY's RESIDENT ALIEN follows Harry, an alien played by Alan Tudyk ("Rogue One," "Firefly") that crash lands on...
Read more