‘Sea of Shadows’ Documentary Rides The Wave Of A Cinematic Aesthetic 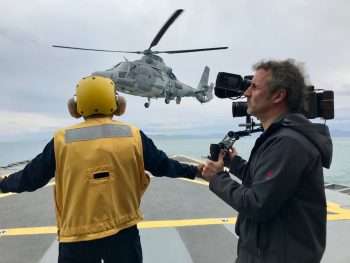 Directed and shot by Richard Ladkani, Sea of Shadows centers on the multi-pronged attempts to save the vaquita porpoise, an endangered species that lives in the Sea of Cortez. Illegal nets are cast in the ocean to catch totoaba, a fish whose swim bladders are sold on the black market. With the Sinaloa drug cartel and Chinese traffickers involved in this operation, saving the vaquita seems like an uphill battle.

One of the greatest strengths of Sea of Shadows is its aim to be more than just a talking head documentary. Ladkani along with editors George Michael Fisher and Verena Schönauer spent ten months editing the documentary. “When I do a film, especially about a tough topic when it’s about the extinction and saving our planet, I really want to focus on the positive sides of the story. I look for heroes,” said Ladkani “I look for inspiration. And I also want to make the movie very cinematic and a beautiful experience.”

Click on the media bar to hear Ladkani talk about his continued collaboration with Earth League International’s Andrea Crosta (the pair worked together on the Netflix documentary The Ivory Game):

Sea of Shadows is now playing in theaters.