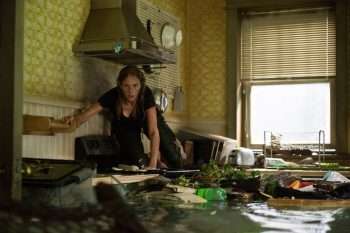 Executive produced by Sam Raimi and directed by Alexandre Aja (Horns), Crawl centers on a woman named Haley (Kaya Scodelario) who ignores evacuation orders to search for her missing dad (Barry Pepper). The pair thankfully reunite, but unfortunately gators are also on the hunt for some food in these Florida floodwaters!

This horror thriller is a rare release these days in a theater dominated by superhero driven and family friendly animated flicks, and Crawl has received its share of first rate reviews. The 87-minute feature, budgeted at $13.5 million, should turn a profit for Paramount if word of mouth keeps it in theaters for several weeks.

Click on the media bar to hear Alexandre Aja elaborate on why he immediately connected to Crawl:

Aja’s other directing credits include Mirrors and Piranha 3D.