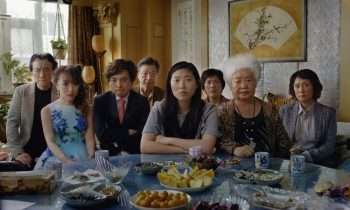 In The Farewell, Awkwafina plays Billi, an Asian American who heads to China after learning her grandmother (Shuzhen Zhao) is dying of cancer. The catch is the grandmother’s entire family is reuniting under the guise of an impending wedding, as they believe that disclosing the information would only make her final days stressful. Directed by Lulu Wang, the film has received its share of critical acclaim.

Tzi Ma and Diana Lin are equally effective as Billi’s parents Haiyan and Jian, as each of these characters have their own way of dealing with the situation. During my chat with the actors I asked them if an extended rehearsal process was needed for the project.

“No nothing like that,” said Ma. “We didn’t have much rehearsal at all, but we have the distinct advantage of Lulu’s mom and dad being present. They were very accessible to us. We had the opportunity to spend time with them in a very meaningful way. They were always there to help us and answer the questions that needed to be answered.”

“We really didn’t need it,” added Lin. “All we needed was to know more about our character and about this family. Especially when we’re digging up something really deep between the mother, the family, and the father. Actually we got a lot. We got to know them so much more than . . . actually we said, ‘Lulu, we know your parents more than you.’ They openly gave us anything we wanted to know about their life story, their relationships, and everything really.”

For the complete interview with Lin and Ma, check out CinemAddicts. Click on the media bar to hear Tzi Ma discuss what makes Lulu Wang a unique filmmaker: