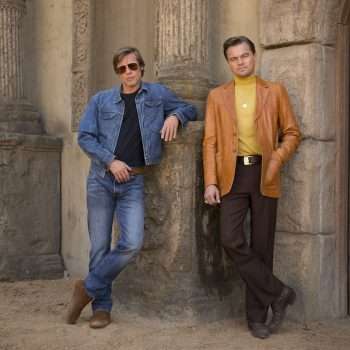 Once Upon A Time In Hollywood features Brad Pitt as Cliff Booth, the easygoing stunt double of actor Rick Dalton (Leonardo DiCaprio). Director Quentin Tarantino’s latest epic is an ode to a Los Angeles that, amidst all the glamour and sunshine, was deeply affected by Tate-Labianca murders.

“That time, 1969 when the Manson murders occured, building up to that there was the free love movement,” said Pitt. “There was a lot of hope and these new ideas floating out there. Cinema was being re-calibrated and when that event happened and the tragic loss of Sharon and others . . . what scares people and why it lasts so much today, I think, was it was a sobering dark look at the dark side of human nature. That pivotal moment was a real loss of innocence and I think that is what the film so beautifully address.”

Click on the media bar to hear Pitt talk about the theme of acceptance that’s featured in Once Upon A Time In Hollywood, a trait that is embodied by Cliff Booth:

Co-starring Margot Robbie as Sharon Tate, Once Upon A Time In Hollywood opens nationwide July 26.