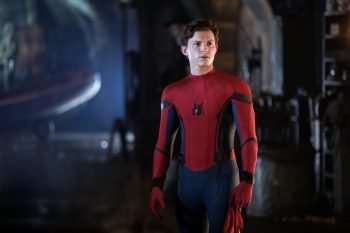 I already know what the next Spider-Man movie will be called: Spider-Man: Home For Christmas.

Homecoming took Peter Parker on a domestic trip, and misadventure followed. Far From Home takes him all across Europe, and more misadventures follow.

So, extrapolating from the National Lampoon model, it’s Vacation, European Vacation, and then Christmas Vacation.

Think about it — you’ve never seen Clark Griswold and Spider-Man in the same room together!

Seriously, though, there is a real thread that ties Peter Parker and Clark Griswold together: Both are earnest men who are trying to connect in a meaningful way with the people they love, yet fate (sometimes driven by bad planning or bad decisions) threatens to destroy those relationships.Of course, Griswold never had to save the world, so that’s where the comparison ends.

The emotional storyline of Spider-Man: Far From Home finds Peter Parker embarking on his most ambitious quest yet — to win the heart of MJ. After falling for a girl from the wrong family tree in Homecoming, Parker now realizes that his real connection is with MJ, and he’s got a six-point plan to win her over during a school trip to Europe. And he’s going to do it without the help of Spider-Man. In fact, he consciously avoids packing his suit for the trip.

Once the school group lands in Venice, however, it becomes clear that this will be no ordinary vacation, as a water monster rises from the Venetian canals. Donning an opera mask, Parker springs into action but soon finds he’s not alone — there’s a new superhero in town, Mysterio, who subdues the monster and temporarily ends the threat.

It turns out that Nick Fury has been tracking a series of incidents involving the Elementals, creatures made up of fire, water, earth, and air. Mysterio enters the picture because he is really Quentin Beck, a traveler from a parallel Earth that was destroyed by these creatures, and he has figured out how they can be defeated. After the water monster is defeated, only the fire monster remains, and they learn its target is Prague. All Parker wants to do, though, is rejoin his classmates, travel to Paris, and get on with his MJ plan. (After all, Fury has Mysterio on his side, and he seems perfectly capable of winning the battle.) Fury wants the extra manpower, though, so he arranges an impromptu “upgrade” for the school trip that will take them to Prague just in time for its annual Carnevale Praha and put Parker right in the middle of the action.

After an epic battle of fire and fury, Mysterio risks all to defeat the last Elemental, and Parker — already insecure and uncertain about his superhero status — decides that Mysterio is a more logical successor to Iron Man atop the Avengers food chain.

Wait, what? That requires a little bit of explanation. See, before his death in “Avengers: Endgame,” Tony Stark had given considerable thought to his succession plan, and he’d decided that young Parker would be a worthy heir. (Why Stark put such a Parker-centric plan into place after he was snapped out of existence at the end of “Infinity War” is a question for another time. For now, we’ll just go with it.) So Stark bequeathed to Parker his latest, greatest, and seemingly last piece of tech: the EDITH (an acronym for “Even Dead, I’m The Hero”) sunglasses, the ultimate security and weaponry system.

It’s only after Parker passes the EDITH glasses to Mysterio that he discovers that Quentin Beck is no superhero — he’s a tech genius and former Stark employee who, spurned by his old boss for being too unstable, seeks revenge. So it turns out the battle against the Elementals was, in reality, a clever ruse to convince Parker to give up EDITH’s power.

So now, Parker has to correct what he now realizes was a horrible mistake — essentially giving up the ability to rule the world to a liar and a madman.

And, since Beck is also a master of holographic illusion, the movie enters serious “Inception” territory as Spider-Man moves through layer after layer of false realities in his quest to reach Beck. Of course, once the battle becomes personal — Beck targets Parker’s friends, including his beloved MJ — that’s when the infamous Spidey-sense (now playfully renamed the “Peter tingle”) kicks in and allows him to save the day.

Spider-Man: Far From Home is a movie that doesn’t want you to leave the edge of your seat. There’s plenty of action, but also enough deception to keep you wondering where the film will go next. (Even if you’re a fan of the comic books and know Mysterio’s really a bad guy, the movie messes with your head just enough to feel Peter Parker’s pain when the treachery is finally revealed.)

And then, just when you think things have been resolved — including, yes, the relationship between Peter and MJ — the movie hits you with even more disorienting bombshells just before the credits roll… and during… and after.

Visually, the movie is a feast for the eyes. The European locations create a beautiful natural backdrop for the action, while the film’s effects (especially during the false reality scenes) are absolutely eye-popping.

And the performances are excellent. As his stature in the Marvel Universe grows, Tom Holland’s Parker/Spider-Man is truly conflicted, and you feel every bit of that conflict. As Peck/Mysterio, Jake Gyllenhaal is pitch-perfect in his coordinated transition from savior to scoundrel. And Samuel L. Jackson, as usual, is the man. The rest of the cast, including Marisa Tomei’s Aunt May, Zendaya’s MJ, and Parker’s other classmates, are all holdovers from Homecoming and benefit from having been part of the same crew before.

Yes, Spider-Man: Far From Home is a Marvel superhero movie. But it also accomplishes the superhuman trick of feeling like something more. (And it has us looking forward to the Christmas movie.)