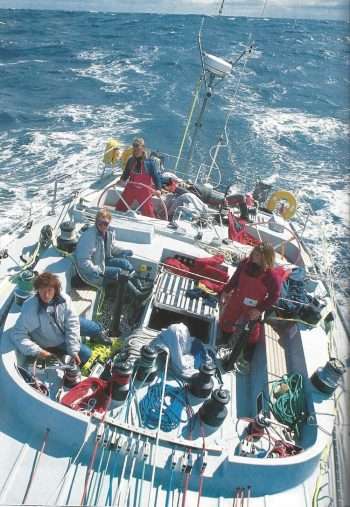 Maiden is the true story of Tracy Edwards’ journey in leading an all-female crew in a 1989 yacht race. Back then she was a 24-year-old cook in charter boats who had a singular dream to enter the Whitbread Round the World with only women by her side, and from the jump that goal was extremely hard to reach.

Landing a sponsor to help achieve Edwards’ goal was nearly impossible, and their actual craft (named, of course, Maiden) also needed its share of repair. Add to that a power struggle for leadership, along with sexism from their competitors and journalists who reported their journey, and one has a dream that may crumble before the race actually began.

In its taut, 97-minute retelling of Maiden’s race around the world, the documentary keeps viewers on their toes, and even if one knows the outcome, director Alex Holmes keeps the proceedings at hand at a fever pitch.

Credit goes to Edwards for being honest about her own flaws regarding her leadership, as Maiden could have existed as a saccharine account of this ultimately inspiring story. Growing up in a troubled household thanks to her stepfather, Edwards’ path to success was filled with its share of obstacles, and her steely and stubborn determination ultimately proved doubters wrong.

My only complaint, and this is a slight nitpick, is that the rest of the crew members should have received a bit more screen time to fully flesh out their own experiences in this monumental event. That being said, Maiden is the story of Edwards’ riveting battle against the odds, and for now, that is more than enough. A must see documentary that also packs a powerful punch in the closing moments, Maiden is exhilarating beyond measure, and don’t be surprised if this documentary is remembered come Oscar time.

Maiden, which I also discuss on the latest episode of CinemAddicts, opens in New York and Los Angeles on June 28.