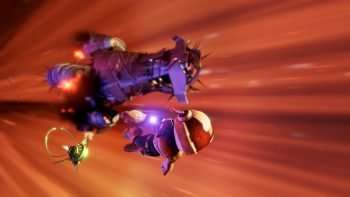 The space adventure Lost Orbit: Terminal Velocity will hit PlayStation 4, Xbox One, Nintendo Switch, and Steam starting July 16. The upgrades will enable gamers to battle space pirates and blow up asteroids. Lost Orbit, originally released in 2015,  is actually making its Xbox One and Switch debut.

With Lost Orbit: Terminal Velocity players can teleport, swim, leap, evade, and bounce through a series of obstacles as they try to find their way back home. Along with the aforementioned ability to smash through asteroids, the game’s upgrades include 12 story driven levels (there is a total of 65 levels), a challenge which has players clearing a path for a starship in danger,  and a boss chase that involves pirates.  Check out the trailer and tell us what you think!