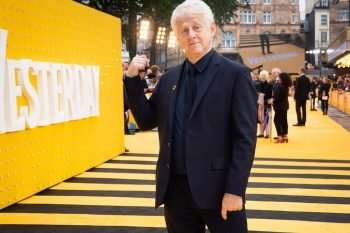 With such screenplays as Notting Hill, Love Actually, and About Time under his belt, Richard Curtis is one of cinema’s most beloved writers. His latest story Yesterday centers on a struggling musician named Jack (Himesh Patel) who is the only person on Earth who seems to remember The Beatles. Capitalizing on that opportunity, Jack starts to perform their tunes and becomes an overnight sensation!

“The main message in this film is the same message in all of my films, which is life is good” said Curtis. “But in this one it’s life is good and listen to more Beatles songs.”

Click on the media bar to hear Curtis talk about two of his favorite Beatles tracks that were left out of the movie.