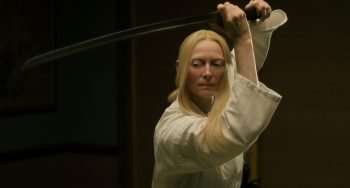 Life and death are a part of director Jim Jarmusch’s universe, and these themes are explicitly found in a couple of his movie’s monikers (Dead Man, Only Lovers Left Alive).

With The Dead Don’t Die, Jarmusch delves into the zombie genre, as the denizens of a small town named Centerville must reconcile that they may be on the menu if they lose their battle with the undead.

Click on the media bar to hear Swinton talk about the “sandbox” atmosphere Jarmusch creates in The Dead Don’t Die: