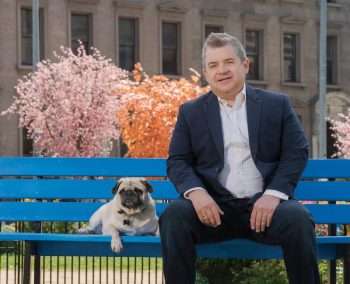 Patton Oswalt returns as the voice of the lovable terrier Max in The Secret Life of Pets 2. This time out Max is undergoing through his share of anxiety since his owner (Ellie Kemper) is now married and has a toddler. Max has developed a nervous tic since he constantly worries about protecting the child, but a trip to the family farm my bring Max a sense of sensibility thanks to the advice from a veteran farm dog named Rooster (Harrison Ford, who makes his animated film debut).

Oswalt’s mutl-faceted career includes a successful run at animation, as he also voiced Remy in the 2007 hit Ratatouille.

Click on the media bar to hear Oswalt talk about Max’s existential crisis in The Secret Life of Pets 2: