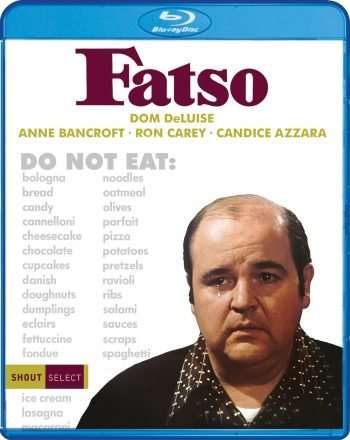 Late actress Anne Bancroft had a stellar career in cinema, and some of her best known films include The Miracle Worker (for which she won an Oscar) and The Graduate. Her work with husband Mel Brooks included the films To Be Or Not To Be (a remake of the Ernst Lubitsch classic) and Silent Movie. That being said, her work as a filmmaker has been overlooked, and Shout Select will release her sole feature directing venture Fatso on Blu-ray.

The tale, which was also penned by Bancroft, centers on Dominic DiNapoli (Dom DeLuise), an overweight man who tries to his best to lose weight and avoid an all too early demise. Bancroft co-stars as his sister Antoinette, and she’s one of the family members who help Dominic realize that love is one aspect that will help him on his weight loss journey. The feature was developed by Brooksfilms, the studio founded by Mel Brooks.