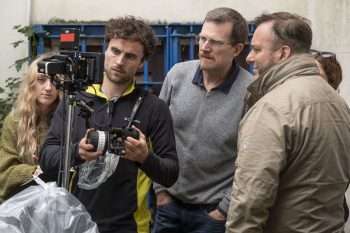 Director/writer Jesse V. Johnson’s latest feature Avengement centers on Cain (Scott Adkins), a tough as they come prisoner who’s on furlough to visit his dying mother. Cain breaks free from the guards and infiltrates a gangster ridden pub, holding these crooks hostage as he details why each of them are in for a very long day.

This action packed crime drama, at the surface, has B-movie trappings, and when done effectively, it should hit moviegoers on different levels. While delivering its share of intense and bone crunching action sequences, Avengement also succeeds as a drama, thanks to a first rate and gritty performance from Adkins.

The fruitful collaboration between Adkins and Johnson is reminiscent of pairings in the past, and although I mentioned such successful partnerships as Howard Hawks and John Wayne, as well as Alain Delon and Jean-Pierre Melville, Johnson accurately pointed out two filmmakers that have also influenced his work.

“I think when you find someone you work very comfortably with and you and well with, it’s a very good thing to do for a filmmaker,” said Johnson, who’s work with Adkins include Triple Threat and Accident Man.” If you look back at film history, there are many instances of a collaboration from a leading man and a director being an area for growth. For me, the guys I would look at would be more like Budd Boetticher or Anthony Mann – the collaborations they had with Randolph Scott (Boetticher) and James Stewart (Mann). These pictures were made as B filler movies but ended up taking a better position critically and with the public often times over the A movies they were partners with when they were being shown. I think it’s very exciting to watch that.”

Click on the media bar to hear Jesse V. Johnson elaborate on what makes his work with Adkins simply tick (Johnson also mentions the Hawks and Wayne pairing in the clip):

Avengement hits theaters and On Demand May 24.