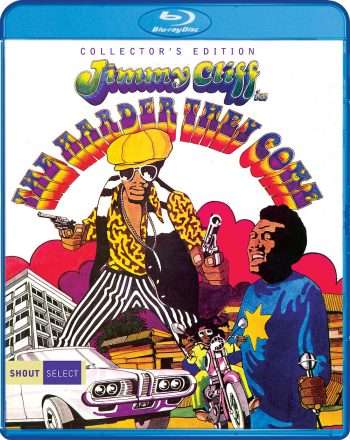 The Harder They Come, the feature headlined by reggae icon Jimmy Cliff, comes out at as a 3-disc Collector’s Edition set via Shout Select on August 20. The restored version, which is a new transfer from the feature’s original 16mm negative, marks the movie’s debut on Blu-ray in the U.S.

The narrative centers on Ivan Martin (Cliff), an aspiring singer who leaves his small village for Kingston in an attempt to follow his dreams. A sad twist of fate ultimately leads him to a life of crime even as he achieves music stardom. Cliff’s soundtrack for the film, thanks to such hits as the title track, “Sitting In Limbo,” and “Many Rivers To Cross,” is considered a classic, so a Blu-ray release of The Harder They Come has been a long time coming!

Special features on the disc include the first ever home entertainment release of No Place Like Home, director Perry Henzell’s follow up to The Harder They Come as well as the documentary Perry Henzell: A Filmmaker’s Odyssey which takes a look at No Place Like Home’s restoration. Other special features of The Harder They Come will be released at a later date.