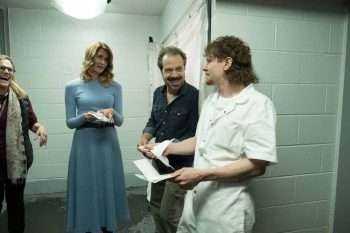 Director Edward Zwick’s acclaimed career includes epic filmmaking (Glory, The Last Samurai, Legends of the Fall) and incisive personal dramas (Love & Other Drugs, Pawn Sacrifice. What binds his diverse set of films, along with their non-pandering approach to story, is the strength of their actors.

Trial By Fire is the true story of death row inmate Cameron Todd Willingham’s (Jack O’Connell) friendship with Elizabeth Gilbert (Laura Dern), a determined woman who fights for his freedom. The picture, which is also an unflinching exploration on the death penalty, is anchored by excellent work from O’Connell and Dern.

“I had seen his work in England and I had even saw his as a young boy in Skins,” said Zwick. “What I really knew about Jack was his courage as an actor. His willingness to tell the truth and go for the authenticity rather than what might have seen more sympathetic. There are certain actors, and I’ll mention no names, who are sort of self protective. And I knew he wouldn’t. It was very important that audiences condemn him at the beginning of the movie as did the people of Corsicana, Texas.”

Click on the media bar to hear Zwick discuss his decision to cast Dern in Trial By Fire.

Trial By Fire opens nationwide May 17.