Diane Keaton Has Plenty To Cheer About With New Comedy ‘Poms’ 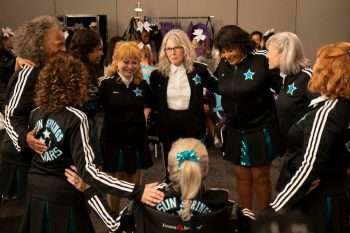 Diane Keaton inspired a generation of women years back in Annie Hall, and now she’s bringing an entirely different level of motivation with her new comedy Poms. The storyline centers on Martha, a seventy something woman who moves to Sun Springs Retirement Community to simply ease into that final sunset. Her neighbor Sheryl (Jacki Weaver) is not excited about Martha’s retreat from existence, and eventually the pair start a cheerleading team to show the younger women how to, for lack of a better word, bring it on!

“Of course I want them to experience something that matters,” said Keaton. “That they like. That they’ve been enriched by in some way or entertained or touched or moves. All of those things. That is what you always want with a movie.”

The project is directed by Zara Hayes, who has spent most of her filmmaking life directing documentaries. In the clip below, Diane Keaton praises Hayes’ casting of Rhea Perlman, Jacki Weaver, and Pam Grier.

Poms is now playing in theaters.