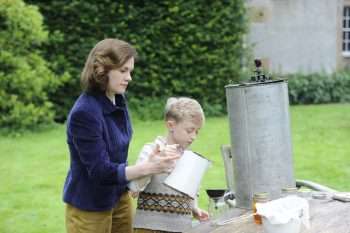 Based on Fiona Shaw’s novel, Tell It To The Bees centers on Jean (Anna Paquin), a doctor who returns to her southern Scotland home to take over her late dad’s medical practice. She befriends a young boy named Charlie (Gregor Selkirk) who shares her passion for bees (she is also a beekeeper), and during one eventful summer Jean and Charlie’s mother Lydia (Holliday Grainger) form a seemingly inextricable bond.

Director Annabel Jankel elaborated on the innate chemistry between the actress. “I think it’s probably a beautiful alchemy of both those thoughts,” said Jankel “Because visualizing Anna Paquin and Holliday Grainger together felt very emotional and connective and it felt sort of instinctively deep down inside that there was a potential for this combination to ignite into something very special. The relationship that they built together was something that just did develop organically and beautifully.”

Jankel, a co-creator of Max Headroom whose directing credits include D.O.A. and Super Mario Bros., talked to us about her growth as a filmmaker over the years. Click on the media bar below to hear Jankel discuss her directing journey.

Tell It To The Bees is now playing in select theaters and is available On Demand.